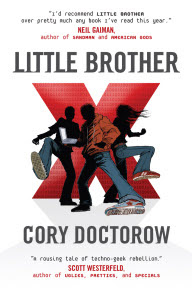 I discovered the book  Little Brother by Cory Doctorow online at Coursera. This was a fantastic read even though it was my least favorite genre Young Adult (YA), and Black people were not the central focus. The author offers a tale of how San Francisco teenagers battle a corrupt U.S. government that illegally has kidnapped and tortured American citizens after a terrorist bombing. I am reading the sequel, Homeland,  now. (Both books are available free on the Internet).

I must thank Coursera for forcing me to step outside of my comfort zone. And, explore the legacy of science fiction in Western literature.This has expanded my understanding of speculative fiction, and I believe this will make me a better writer.

The Fantasy and Science Fiction: The Human Mind, Our Modern World  started January 22, 2013, and ended on April 9, 2013 (another session starts soon). We read books and short stories.  I delved into fantasy, fairy tale, and science fiction written by many different authors from the 1800s to present day. There was a lot of discussion among people in different nations, who spoke different languages and had various cultural backgrounds.

The course required that students submit reviews of their readings as well as  analyze what other students had written. Each week, I reviewed five essays and received up to five reviews of what I had written about each assignment. The rating scale was from 1 (the lowest ranking) to 3 (the most highly regarded). I never got a 6, but I did receive many positive comments and candid advice about my writing.

Our teacher was Eric S. Rabkin. Each week after we submitted our essays and reviews of our fellow students, Rabkin posted short video lectures about the works we had just read. Each video was a lesson about a specific aspect of our reading. This was enlightening and encouraging for anyone considering writing sci-fi for a living.

I had the pleasure of discovering the original Frankenstein, Dracula,  Invisible Man, John Carter of Mars and  others. I was immersed in great (and not so great) literature written by masters of the art. We have been told, that to be a good writer, you have to be a voracious reader.

Also,  in the course I was happy to see that speculative fiction is a global event. It involves many different aspects of what the future could be.  African, Asian, European and other ethnic/geographic writers have their own views of the future and how we all will play a role in it.  According to the New York Times, "Massive Open Online Courses (MOOC) are often free, non-degree programs that have been drawing top professors. Some courses may attract nearly a 100,000 participants."

Links to my essays and  peer reviewers from Coursera can be found at staffordbattle.com
at April 19, 2013 No comments: