On the Edge of the Abyss: Why I Wrote Nat Turner's Secret 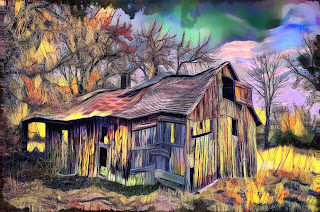 We on the edge of falling into the abyss or rising to great heights.
If we consider how Black people in America have been treated since Nat Turner's Revolt in the 1800s, very little has substantially changed. Technologies have changed. Politics have become more polished and deceitful. The white ruling rich are much more powerful and scornful. People remain scared for many of the same reasons when Nat strode through the night like an avenging angel killing any opposition that stood in his path.
It is often strange to me how a short story I wrote almost a decade ago, is so appropriate today. Nat Turner's Secret has been beautifully rendered using today's online dramatic technologies. Broadway has been shuttered. Live small theatre has all but evaporated. It is reckless to gather in groups. Families no longer meet for Sunday dinners or Saturday backyard parties. Some spouses sleep in different rooms to prevent sickness to those closest to them. We may no longer be able to gather in person, but it is critical that we still gather to educate, entertain, encourage and enlighten online. I greatly applaud the actors, director and producers who put the spotlight on my writing. 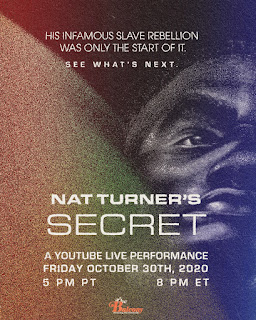 Sometimes -- during those intense periods of mental funk that we all suffer when we think no one is observing us -- I see Obama as Nat Turner. Strong, good intentions, inspirational, willing to play by the system doing everything according to the American Dream. Yet, here we are in 2020. Riots. Anger. Injustice. Persecution.
Nat never gave up nor surrendered even with an angry rope around his neck; he had a plan to pull us back from the abyss and into the light.
I wrote an 8-episode series that reveals Nat's secrets, sorrows and joys. With the right impetus, we all can rise.
Vote!
at October 29, 2020 No comments: