Meet the Teeth of AFROFuturism 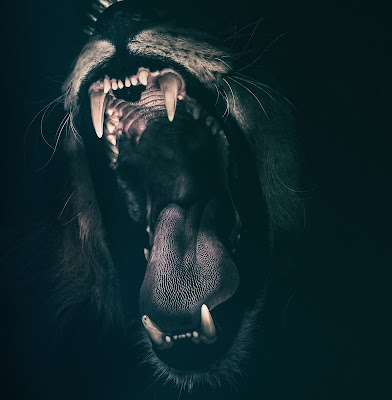 AFROFuturism roars and is prominent in the  Black Panther movie that has dumped huge buckets of green on Marvel Comics and the  Mouse.

But what benefits go to Black communities around the world who celebrate this movie? What do we really gain?

Growth is essential to a good story. T'Challa is a very different and more enligtened person by the end of the movie. Thus, we need writers who genuinely understand the Black experience to make screenplays palatable to moviegoers.  Old stereotypes will fade, hopefully. A new generation of creators from all cultures will gain ground with new ideas.

More People of Color will be Earning Paychecks in Hollywood


Movie producers, writers, and directors will require black super villains and heroes to dance on the big screen to entertain us. This will sell tickets, overpriced popcorn, and fruit-colored sugar water. Also, the technicians, artists, musicians, caterers and thousands of other support staff can take advantage of a flood of films whose AFROCentric stars will open opportunities for others to get a piece of the pie.


AFROFuturism can encourage all of us regardless of skin color, religion, social status, etc.,  to create a better future. Because, at the root, we are all African. Thus, Black Panther is a representation of all of us.


. . . . I scanned his aura, he was truly Black Mage, the legendary practitioner of the African mystic arts. His thick, wooly beard was salt-pepper gray. His perfectly manicured Afro was jet black; his hair framed his face like a majestic royal crown -- at least once a week he groomed his fro with a minor incantation to keep a perfect oval shape and bright sheen. He wore a pinstriped business suit, pink shirt accompanied with brown gator-skin shoes.  In his right hand was a polished oak walking cane.
Obviously aware of my mental scans that he could have easily blocked, he said aloud, "There is always a shotgun house involved in the swamp. Front door/back door. One window.  Two rooms. No indoor plumbing.  Piss in the bushes.  Squat behind a tree. A green candle always burns in the center of the front room. Watchers are everywhere. Some good, some evil. Send your soul to hell or to New Jersey, just for fun." He chuckled. "Before we go into battle, tell me more about yourself."
"As  you know, I am an orphan. But you would not call me ordinary," I said. "My first Nubian guardians recorded me into the digital annuals as a young, slender woman named Abebe. That observation was only half right. For a few days each month, I am female with the ability to conceive daughters; I can deliver a baby in the appropriate time span, if I chose such a lengthy burden. Some months, I am a functioning male for a day or two, able to sire sons. My appearance hints that I am  approaching 30 years of age despite the fact that I have lived as an adult nearly twice that long -- or longer, I am not sure.  Most of the time, I am just a neutral. I am a damn good fighter when I am neutral. No emotions. But my conjuring is more devastating as a female. The few moments when I had been involved in a firefight as a male are only a blur in my mind.  I don’t remember much – just the shocked expressions of my teachers as they crawled out from underneath the rubble that I had caused. Buildings had been toppled. Steel girdles bent. Stone crushed. Some conjurors described my gender transformations as apocalyptic. I may be the only person in this universe with such abilities."
Mage my mentor paused to take a deep breath. " I will need your special talents.  I wagered with a Hell demon that I could save the life of Nathaniel ‘Nat’ Turner."
I frowned and said, “Turner’s deceased -- been stone cold dead for more than a long time.”  Few normals knew, that Turner was a skilled practitioner when he initiated his slave revolt. I was told that Nat Turner was a hothead, untrustworthy. He willfully disobeyed recommendations from the joint council. Nat with his band of freedom fighters murdered a lot of white folks along with some Blacks who hesistated to join him. The white citizens of Virginia caught, then hanged him. Hundreds of innocent Blacks were accused wrongly then hung as a result of Turner's actions.
Mage said, "Nat is still alive -- sort of. Chained. We will free him. He’s probably anxious to continue his mission.” Mage was broad shouldered, handsome, supremely confident. Again, I remembered online rumors that he had a large harem of women who willingly gave everything they owned to him. My spine prickled. He said, "Demons always cheat when they proposition you. I used such chicanery to my own advantage."
He zapped an annoying mosquito with his cane. The energy blast gouged the trunk of a large evergreen tree draped with choking vines. Smoldering ash flakes filled the clearing but luckily there was no bonfire to alert the enemy. The smoke chased away the insect hordes. Mage scratched his beard. He asked,  “Are you male or female, today?”
I stopped. I took off my extra-large, red, black and green "Vote Obama" hoodie. I hated bras. I never wore them. Then I pull down and removed my silk gym shorts. I tossed my red-striped, Tuesday panties at Mage. He easily caught the token with his walking stick. I stretched to let him get a full view of my present body. His probing eyes made me tingle. His thoughts made me a little horny. The warm moist wind felt good on my trim stomach, shapely thighs, full, succulent buttocks. This was the way people were meant to live; not hiding behind furs or leather or cotton or needless bling. My power necklace combined with wrist bands were the only adornment I needed. Being nude also circumvented a lot of irritating questions about my unusual gender changes. In the fading sunlight, my naked brown skin became a beautiful shade of rare gold.
Mage stared. His open mouth formed a silent “ohhh”. His eyebrows arched.  After a moment, he said, “I will rely on your remarkable conjure strength as a woman. Put your clothes back on. I’m not as saintly as I appear.” He handed my colorful undies to me then turned abruptly away to resume his pace. . . .

(Get the full story on Amazon: New African Fables for Adults. Honest reviews are welcome.)
at March 19, 2018 No comments: