If you want to start an argument at your favorite neighborhood tavern, backyard BBQ, church social or any city block in the country, suggest that religion and science fiction are comparable. If we are open minded, there is considerable intermingling in religion and sci-fi to ponder.

Gods and saints appear regularly in comic books with characters such as Thor, Hercules, Wonder Woman, Isis as well as the Judeo Christian God. Religious texts offer larger than life heroes such as Samson who, like Hercules, had tremendous strengths and multiple vulnerabilities. Moses could turn his staff into a snake. Jesus had amazing abilities including the ability to defy death like Deadpool or Wolverine.

Many "true believers" are willing to suspend belief and have faith that Superman could fly in a gravity well such as Earth's, or that Noah could cram hundreds of wild animals into a wooden boat outfitted with adequate feeding stations and waste disposal facilities.

Not all sci-fi fans are atheists. Many consider that there is a higher being; a spiritual purpose and moral compass to follow. Church goers can go to movies and cheer the exploits of Spiderman or the Avengers and not feel that their faith is being challenged.

Science and technology has long inspired writers and artist to delve into sci-if. Historically, there are founders of religions who were real humans and crusaders with phenomenal abilities. 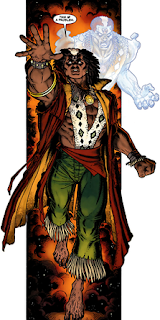 People of African descent have thousands of religious sects. Some of their deities have crossed over to the speculative fiction realm. Brother Voodoo is a good example. He was a Black sorcerer from Haiti who took over for Dr. Strange, the Sorcerer Supreme.

Black and brown societies are not strangers to amazing technology — there are engineering marvels throughout Africa and the Americas since ancient times. These scientists and technologists have produced  stories to be absorbed by the masses.

It is up to each person to chose what to believe in to feel whole. We need our super heroes in science fiction and religion.