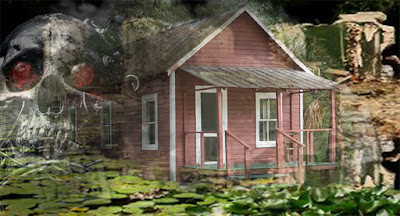 The South is Alive with Dead AFRO Spooks

When Africans against their will were brought to the Americas, their vengeful gods and dire demons came with them in anger and lust for human souls. So be wary of the knocking noises from the locked door in the rear of the house.  Fear the large tree in the backyard that moans in the breeze as branches sway towards you.

Maggie pouted. “I thought you were a top notch reporter. Did you research anything relevant for this story?”

“Of course,” said Quinton refocusing his attention on his job instead of her exposed, smooth thigh. “Your big tree out back is supposed to be haunted just like every other large tree in North Carolina. Evidently, a runaway slave on his way to sanctuary in the Great Dismal Swamp was caught and chained to this particular tree as a bloody lesson for other runaways that came this way. But these slave catchers were a really sadistic bunch of Appalachian inbreeds. They kept the runaway alive, and had a big celebration. Big party. Booze, fiddlers, games, and feast. They expertly carved off pieces of the man and made stew. Fingers, toes, ears, hands, skin were all part of the main dish. Legend tells us that the man survived for nearly 6 days in incredible pain. His wails could be heard for miles around. But the slave catchers just prodded their musicians to play a little louder and they danced a little harder.

"On the morning of day 7, a decision was made to finish the meal and head back home in the hills. But a thick fog rushed in and the man, or what was left of him vanished in an instant. Only his bloody chains wrapped around the trunk remained as if the tree had swallowed him whole. The white men pondered what to do next. A group picked up their axes and saws and agreed to hack down the tree. As they approached the giant oak, however, leaves began rustling, then the branches of the tree shook violently while its roots angrily rose up out of the ground and began clawing and ripping human flesh. The slave catchers tried to run away but a howling African tree demon strangled all of the men except for one who somehow got away.”

Quinton shuddered. “The story is told in various versions. But the end result is the same.”

Maggie rocked in her chair quietly for a few moments. Then she offered, “Lemonade?”

-- Excerpt from "The Lynching" in the AFRO Sci-fi Anthology. Available "free" at Amazon for a limited time.


The Southern states of the USA are rich in history and mysticism. It is a delicious blend of native Americans, African laborers, and European colonialists. Stir in deadly snake and gator infested wetlands, mysterious coastal islands inhabited by plantation escapees, Black Cajuns thriving in the deepest recesses of the Bayou. Picture the infamous "shotgun house" where many stories of horror and heroism were conjured.

Every culture from every inhabited continent on the planet has ghost stories.  Likewise, Africans and the Disapora have a lot to scare us with as well as enlighten.