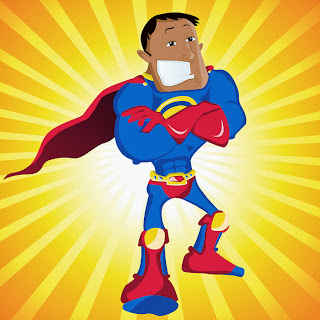 As more African Americans attend science fiction and comic book conventions, they encounter discussions about race and culture in speculative fiction. This occurs during panel presentations,  banter at hotel bars or  conversation in a crowded elevator. And, often, as people introduce themselves,  sooner or later  the representative black person (which is usually me) will get asked, “What do you do?”

It’s a harmless question that could lead to a good networking opportunity. You never know when you might bump into publishers looking for new talent. Therefore, in such a situation I  respond, “I write African and African American science fiction.” I always expect the silence and wait patiently for the next obvious question.

“What makes a Black superhero different from a white one?”  This is a juicy topic among  attendees  dressed as Teenage Ninja Turtles or Star Wars Storm Troopers or scantily clad warrior princesses.

By habit, I respond depending upon my mood. I have the option to snidely quip that’s how the author wrote the story. But that’s a lame reply and these people paid good money to converse, exchange ideas and to exercise their escapism muscles. If the sobriety and intelligence of the audience is of a certain level, I respond like this: “Afrocentric characters are governed by their origins and their cultural alliances. Typically, a Black super hero or heroine was born or created in Africa or an African community that could be located anywhere in this world or an alternative universe. However, we should always be careful to never assign physical characteristics such as skin color or fashion sense as adequate qualifiers for reasons that I later will explain. If surrounded by an Africa-like setting, the super being initially will demonstrate an allegiance to protect and serve Black people -- an environment they feel most closely associated with, naturally. However, as their purpose and abilities expand, they will eventually deem it important to use their powers to help everyone regardless of race or culture. Let me explain."

“One of my favorite comic book characters is Storm. Storm a.k.a  Ororo Monroe, is blue-eyed with white flowing hair and was born in New York City. But also she is a descendant of an ancient line of African priestesses, all of whom have the potential to wield magic and control the weather as well as fly. As a young girl, Ororo is ignorant of her gifts. She travels to Africa, suffers many tragedies and finds herself  homeless and without parents. Eventually, she survives and crosses the desert to find her ancient homeland. There, she is nurtured and groomed to take full advantage of her powers. She uses her super abilities to protect her village and the continent. As she grows, she takes on the task to protect the entire planet by joining and leading the X-Men.”

I like to keep my momentum, so I usually jump quickly into my next point.

“My most favorite Black speculative fictional character is Doro from Octavia Butler’s Wild Seed and the Pattern Master books. Doro originates in Africa as a demon who can possess bodies, killing the original host. At first, Doro is insane, mindlessly wandering from body to body killing thousands of people. Eventually, he does gain mental control and carefully selects who he kills and who he shelters. By this time, the slave trade is in full swing, and Doro is busy protecting and preparing to move his most cherished people to America, where he feels they will be safer. Physically, Doro can be anybody. Yet, his protects his own people and eventually expands to protect others regardless of their race or culture. Granted, he also feeds on people regardless of race or culture. He is a flawed hero, but he is an AFROcentric super being.  But let me offer my final supposition."

“Consider this:  Does Tarzan qualify as a Black superhero? When he was an infant, he drops into Africa,  his parents die and he is adopted by the African environment.  In Africa, he matures and uses his great strength to fight evil and help the weak. This usually involves beating the snot out of greedy white Europeans who were harassing Africans.  In some stories, Tarzan forms close alliances with the African chiefs  and  becomes a hero to the people. Before you decide also ponder this: what other hero fell from the sky and became completely absorbed and revered  by the native people who took him in? Superman, of course. If you peel back the surface layers, you can see that Superman is not a Caucasian American; he technically is not even human even though he looks like a human. Again, physical appearances can be deceiving. The Man of Steel is an illegal space alien who can lift an aircraft carrier. In fact, in some versions of the Superman myth, he crash lands in  Stalinist Russia where he becomes the people’s champion who fights the decadency of the Western nations.   I wonder what might have happened if the baby Kal-El had landed in 18th Century South Africa and been raised by Emperor Shaka Zulu? But I digress. . ."  At this point, I can allow others to chime in. My primary  point is made.

My brief comments are usually accepted well, but sometimes my statements are like pouring good Jamaican Rum onto a camp fire. However, it is all good intellectual fun and people get excited when there is a controversy to promote.  It is time for me to back out of the conversation and make a exit to my room, allowing the debate to continue without me. There, I can relax, pop open a beer and power-up Netflix. During my spare time,  I like to search for lost episodes of “Astroboy” who happens to be my favorite Asian superhero.
at October 28, 2013 No comments: