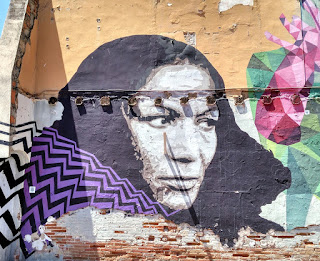 Heartless military-style community policing, ridiculous barricading of natural geography, weaponizing borders has become acceptable in Trump's 21st Century Dystopia American Nightmare. This is a dire result of our idiotic and cowardly political landscape that encourages a madman to rule the country.

Some aspects of AFROFuturism suggest that we should abandon culturally biased hate to restrict human movement and interaction.

We should progress to a properly administered, humane immigration policy. This would be healthy and increase prosperity for newcomers and existing residents. Routes of free and unhindered migration should be established and protected.

There is nothing wrong having an (monitored) open border with friendly countries.

Other continental regions around the world are embracing free transfer of people. The African Union, the European Union, and other places are easing the pathways for individuals to work, gain citizenship and prosper in places where they were NOT born.  There is no logical or ethical reason to stop populations of people improving their lives as well as enhancing the economy of several nations by moving from one place to another.

Political tyrants for their own personal gains (or insanity) demand the control of people. In fairness to the current system, there currently are open borders: for white people. Brown people need not apply.

This is the challenge for AFROFuturists: expose the hypocrisies and build worlds that equally embrace all people via books, music, and art.