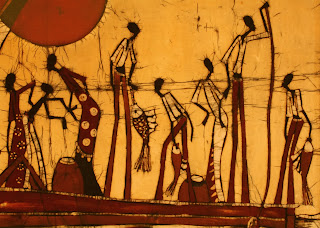 Utopian and Dystopian Fiction in the African Diasporia

Yea! it is the year 2014. When I was a kid, I was sure that by the year 2000 we would all be living in the future -- like the Jetsons and their flying cars.  To my knowledge, however, the Jetsons never portrayed a single non-white character. Robots and space aliens were fine, but to offer an Asian or African person seems to have been forbidden by the Hanna-Barbera crew who created this cartoon predicting the future.

I don't want to discuss racist cartoonists. It would take too long.  But I can offer observations that anyone can  explore using "The Google".  I will probably offer a more detailed discussion at the African American Science Fiction website.

The Jetson's world was presented  as a utopia for  American style Western Capitalism. But first, let's steal some common text from Wikipedia:


The utopia and its offshoot, the dystopia, are genres of literature that explore social and political structures. Utopian fiction is the creation of an ideal society, or utopia, as the setting for a novel. Dystopian fiction (sometimes referred to as apocalyptic literature) is the opposite: creation of an utterly horrible or degraded society that is generally headed to an irreversible oblivion, or dystopia. Many novels combine both, often as a metaphor for the different directions humanity can take in its choices, ending up with one of two possible futures.


In AFROCentric speculative fiction, there are  examples of "good world" and "bad world." I will mention just a few, but I welcome comments regarding Black utopias and dystopias especially as protrayed in films such as Pumzi by Wanuri Kahiu.

Octavia Butler gained fame by writing fiction where Black people prospered and suffered in various aspects of an alternative world.  Her "Parable" novels showed us how Black people living in a totally dysfunctional society used their wits and courage to survive and build a new future.

In "Steamfunk",  a derivative of Steampunk,  Black characters dominate and offer visions of  ex-slaves controlling the South of the United States after its Civil War.  Of course, Blacks had to defend against  crazy white people who sought to reclaim lost territory.

Black people were  the global leaders in  Lion's Blood and Zulu Heart by Steven Barnes. In those novels, Africans  colonized the Americas and created a formidable empire.

George S. Schuyler dreamed of a world where white rulers were kicked out of Africa, an utopia for Black people was created and  Europe attacked by Africa in his compilation of serial stories called Black Empire.

Your answer may depend upon the following:
In fiction, Black writers expand perceptions,  encourage us to consider what type of world we want to live in. Speculative fictions inspires us to build tools and community to better our society by presenting the negative and the positive.

However, here I want to say, we can create the world we live in or want to live in -- some are good,  some are bad. We have the ability to choose.  If we make a bad choice, we must live with the consequences.

Why Africa Must Go to the Moon 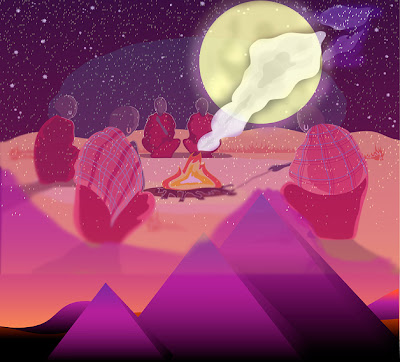 There are many reasons why the nations of Africa should set aside their religious conflicts,  invite the African Diaspora to return home,  create a common currency and go to the Moon. India just launched a probe to Mars. The Chinese are planning a space station and an effort to put an installation for humans on the Moon. The Western powers are retooling to reach out to the distant moons of Jupiter and Saturn. There is even talk of colonizing Venus and building cloud cities. The Japanese seek to go to Earth's moon and  build a power station to beam electricity back to our planet. International corporations have formed collaborations to go into deep space and capture asteroids that can be mined for metals and minerals as well as precious water valuable for fuel and breathing.

Space agencies exist on every continent except Antarctica. However, if there is a race to the Moon, or any moon, sadly, Africa is sitting on the bleachers in the cheap seats watching other players commit to winning on the playing field. But that could change dramatically, once  Black people are inspired to setting higher goals in today's rapidly evolving global society.

There is an entire solar system within our grasp to explore and exploit (hopefully, there will be no intelligent life that we can abuse). Incredible possibilities exist. But how do we influence subsistence farmers, fishermen, bus drivers, students, housewives, and dictators to focus on the big bright orb that we see almost every night.

We can use science fiction to inspire people of all ages and backgrounds to set their sights on a lofty goal. We need stories. We need movies. We need music and art. An effort to establish a base on the moon would create millions of jobs (or at least thousands). The technologies developed would greatly benefit all people. We are talking more than just making space juice such as Tang. But we have to inspire people to think bigger-- there is more than one moon, there is more than one dream.

This is the breakdown of planets with moons (but subject to change as  humans stretch out into their local solar neighborhood).

Pluto which has been demoted from full planet status to dwarf planet has five moons. And Pluto sits on the edge of the solar system where billions of bodies possessing the riches of the universe orbit the sun.

Ganymede circling Jupiter is the largest moon in the solar system whereas our Moon is only the fifth largest. Several other moons may have buried under miles of ice, liquid oceans bigger than anything we see on earth.  Some moons are volcanic. Some have huge seas of liquid methane.

So, why should Africa go to the Moon or travel to  any of the moons that this solar system is blessed with?  Resources are the answer. Africa has most of the mineral resources that the space-faring nations are desperate for. However, those resource are finite and more difficult to obtain each year. Also, there are critical environmental concerns. We have to plan for our future. We must not foul our nest. We have to take flight.

Africa must go to the moon, if for nothing else than to improve living conditions that people have today. Building a technology for a grand goal, means having more schools and encouraging people  to invent and play a significant role in the space race. This also means increased incomes, infrastructure development, innovation in food and shelter as well as a commitment to do things more efficiently without endangering our health or ruining our landscapes.

Africa needs to go to the moon to earn its rightful place in the modern world -- graduating from a developing economy and becoming a full partner among the superpowers  (a feat that India, China and Japan have accomplished).

A shout-out has to go to a Black Science Fiction book: Discovery which is the first installment of the Darkside Trilogy by William Hayashi.  The Darkside Universe is a speculative world which tells the tale of what happens in the United Sates of America when the country discovers that African Americans have been secretly living on the backside of the moon since before Neil Armstrong arrived. (Purchase the book at Amazon.)

I haven't read or reviewed it yet, but we need more tales like this to help Africa go to the moon.