The First Empire to Strike Back!

Take A Look at an AFROFuturism Masterpiece 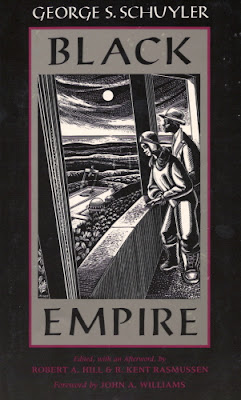 In the 1930s, George Schuyer, an ultra conservative Black writer, published a satirical attack against Marcus Garvey, the Black church, the Harlem Renaissance and other rising AFROCentric movements during a difficult time in America for  multiculturism. Schuyler considered his writings to be a hilarious joke as "hokum and hack work of the purest vein."

Yet, for more than two years, Schuyler's serialized exploits of a ruthless Black genius who actively plotted to conquer Western civilization, captured legions of enthusiastic Black readers. They were fascinated by a fictional organization that created futuristic technology to change Black lives.

During the ugly economic collapse of the Great Depression, nearly a decade before World War II,  popular sci-fi media of the time exalted the exploits of Flash Gordon and Buck Rogers in movie theaters and radio, but only in the pulp magazines and newspapers which sold for pennies The Black Internationale: Story of Black Genius Against the World and the sequel, Black Empire: An Imaginative Story of a Great New Civilization in Modern Africa appeared and was passed hand-to-hand among Black readers who marveled at the mere speculation of a future when people of color were masters of technology and able to chart their destinies. Originally written under the pseudonym, Samuel I. Brooks, George Schuyler penned for the black weekly newspaper, The Pittsburgh Courier,  the story of Carl Slater, who accidentally witnesses a white woman's murder in Harlem.  Slater is drawn into the machinations of the deadly Dr. Henry Belsidus, leader of the Black Internationale, an elite organization of Black professionals determined to liberate Africa and restore Blacks to their rightful position of dominance on the planet. The calculating Belsidus seems maniacal, but he  reveals to Slater a cunning plan:

"My son, all great schemes appear mad in the beginning.  Christians, Communists, Fascists and Nazis were at first called scary.  Success made them sane.  With brains, courage and wealth even the most  fantastic scheme can become a reality.  I have dedicated my life, Slater, to destroying white world supremacy.  My ideal and objective is very frankly to cast down Caucasians and elevate the colored  people in their places.  I plan to do this by every means within my power.  I intend to stop at nothing, Slater, whether right or wrong.  Right is success.  Wrong is failure.  I will not fail because  I am ruthless.  Those who fail are them men who get sentimental, who weaken, who balk at a little bloodshed.  Such vermin deserve to fail.  Every great movement the world has ever seen has  collapsed because it grew weak.  I shall never become weak, nor shall I ever tolerate weakness around me.  Weakness means failure, Slater, and I do not intend to fail."

Written at the break-neck speed of  a "Perils of Pauline" weekly melodrama, every chapter in Black Empire is booby-trapped with dire dangers and neck-twisting turnabouts.

Star Wars' Luke and Hans faced evil Darth Vader and supernatural forces. In the 1930s, AFROFuturists like George Schuyer were building hope by envisioning Black women and men of power to inspire and enlighten.

The world needs strong black villains and great heroes to confront them. We need AFROFuturism.

Photo Credit: Sorry, I found Afro Hans and Leia on the Internet randomly. I would love to give the rightful creator due credit for borrowing this image. E-mail me. Thanks.