What was the first science fiction movie featuring an all Black cast?  Was it a success? How talented were the filmmaker and actors working on a very low-budget film before 4-color cinematography was perfected? 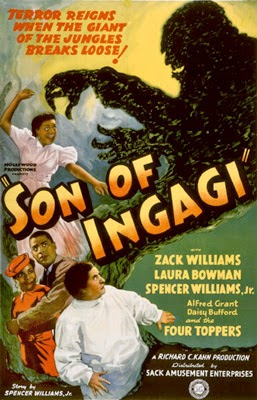 The special effects may seem awful; an actor in a rubbery monster costume. No CGI. No 3-D. Music from wax disks decoded by a steel needle.

Why did the Black characters sing and dance, while unaware of the approaching African monster who had been set loose on American soil?  Did "Feets git moving" fulfill popular expectations?

Don't worry. "Race" movies had a purposeful place in America's diverse social fabric. It was a necessity that created opportunities to build a stronger, more reasonable society.

This relatively unknown, yet very important 1940s speculative fiction film probably was never shown in segregated movie theaters that were located down south, up north and way west. Possibly, its exposure in the few venues available did inspire people to believe in cultural heroism and a new society to come.  Civil Rights. Black Power. Equal Economic Opportunities. The Presidency.

It is a fairly predictable sci-fi flick. Boy marries girl. Hideous monster kidnaps girl. Boy overcomes monster and rescues his sweetheart. Yet, probing deeper, you see more when you open your eyes.

A Black man faces extreme economic disadvantages in a world set against him.  Despite the odds, he saves his woman from poverty and offers her a good life. Of course, the opposite could have happened at any moment -- the woman could have created economic prosperity, or both woman and man could have been eaten by a savage monster called America.

That is why tickets and popcorn and large sodas were sold to crowds of people on Saturday afternoons.  We saw our personal demons on the big screen; fought them and hopefully won -- that emotional energy carried over into our day-to-day lives. We became heroes. We were given dreams.

'Nuff said.  Watch.  (Thanks go to Wikipedia and YouTube)