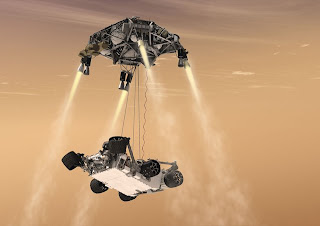 In case you have been hiding under a rock, NASA and the United States of America have landed another robot on Mars.

Is this a big event?

Contrary to the misconceptions promoted by the political right, NASA is alive and doing well, and setting the organization's sights on higher goals. Almost every nation has a satellite or access to a satellite in low Earth orbit. Only the U.S.A. has a SUV cruising on the surface of Mars. Several countries are attempting to get back to the Moon. American spacecrafts have exited the solar system (any moment now) on their way to the stars.

There are oceans larger than the Pacific on bodies around the giant planets Jupiter and Saturn. NASA and its partners have plans to "Go Fishing" there. And,  later, maybe capture an asteroid or two in the Asteroid Belt.

How does all this effect the price of a price of a dozen of eggs? $2.5 billion which includes spacecraft development, science investigations, and the cost of launch and operations has been injected into our economy. This is not money squandered in some rich playboy's offshore bank account. These are salaries paid to thousands of workers who made NASA's Mars Science Laboratory mission possible.  Landing on Mars allows people on Earth to buy cereal and orange  juice and gasoline and  tuition to college for sons and daughters.

That is a good reason to celebrate.