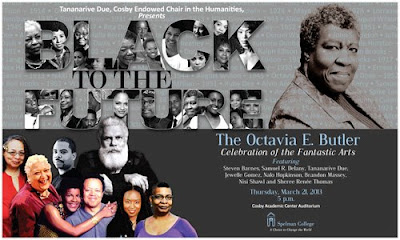 In the 1930s, there was the Harlem Renaissance. On March 23, 2013, we celebrate AFRO  Fantastic Arts. Afrofuturism fueled by African Diaspora Speculative Fiction and other progressive artistic ventures  are being popularized. Newly recognized  writers, filmmakers, artists, musicians and other creative minds are rising in AFRO Futurism.  This month, we honor and remember Octavia Butler.

Cosby Building Lobby and Auditorium
Spelman College Museum of Fine Art
Pioneers in black speculative fiction will gather at Spelman College, Thursday, March 21, 2013, to celebrate the legacy of science fiction novelist Octavia E. Butler at “Black to the Future: the Octavia E. Butler Celebration of the Fantastic Arts.”  This is Tananarive Due’s culminating event as the 2012-2013 William and Camille Hanks Cosby Chair in the Humanities.

Octavia E. Butler (1947-2006), who won a MacArthur Genius Grant as well as Hugo and Nebula awards, was a pioneer and one of the nation’s most beloved standard bearers in the realm of social science fiction. Her novels, which include Kindred, Patternmaster and Parable of the Sower, are well-researched and deeply thoughtful meditations on power dynamics and community building between colliding populations of humans, mentally enhanced humans, and alien species. Her strong, complex heroines have resonated with readers for decades.